Such a nice, nice weekend.  The weather turned gorgeous and buds are popping open all over the place.

Carol arrived early Saturday morning – enough time for coffee and avocado toast before we took off for the Steel City Fiber Festival.  We thoroughly enjoyed ourselves.  The festival is much, much smaller than MDSW and, for me, it was perfect.  I did miss seeing a lot of animals – only a few here.  Here is Carol with a friend: 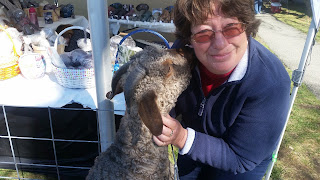 And here are some little babies with their mother chowing down in the background. 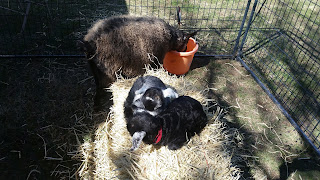 These were the only animals we saw other than angora rabbits (HUGE) that some women were holding as they used their spinning wheels.  I imagine the festival may grow each year (this is only the second year for it).

I believe there were around 90 (give or take) vendors.  No big names like there are at MDSW, but lots and lots of independent dyers.  There was one pottery person, several soap-makers and some selling beads, etc.  So proud of myself – I did not go overboard and came home with more money than I spent!  (very unusual for me – lol).  I’ve been wanting to make a shawl with some gradient yarn so I bought this skein plus the colorful sock yarn skein. 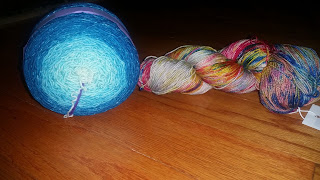 I also picked up this set of tiny skeins for making a pair (or two) of Squad Mitts (Mason Dixon)  I should have taken the skeins out of the bag before taking the picture - sorry! 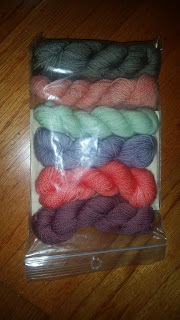 There were a number of vendors selling project bags too, but sadly (or fortunately??) I didn’t see any that I just had to have.

The venue itself is very easy to get to – just 5 minutes or so off the PA Turnpike and it only took us an hour from my house.  We even ran into a friend of Carol’s whom I had not seen in probably 30 years!!  The Merchants Square Mall where the festival was is an older building, and not the cleanest.  The main part of the festival was in the “showroom” – the rest of the indoor space is filled with flea market type vendors.  I believe they also have a train display somewhere.  Fletch loves flea markets, so he said he would go next year – something for him to do while I walk around fondling yarn – lol.  There were no long lines and it was easy to see each vendor’s offerings.  Everyone was so friendly and welcoming.  One vendor described the festival as much more laid back than MDSW.  I would agree.  Though I enjoyed MDSW the two times I have gone, I probably won’t go again for a number of years (I hate the traffic jams and the crowds).

The BBQ shrimp dinner turned out great Saturday night.  I did not teach Carol how to knit socks.  Turns out she had completely forgotten how to knit, how to purl, even how to cast on.  So, I showed her those things and she played around with some yarn I gave her (she did buy a gorgeous skein of sock yarn, but I gave her yarn to practice on).  She’s going to try to knit a scarf first which I think is smart before she tries to tackle socks.

I finally got a bit of time to work on Sigla Sunday afternoon.  I finished the colorwork at the top – I love, love, love the blue.  This picture makes the neck look strange, but it was starting to fold back on itself.  I just wanted all the colors to show in this picture. 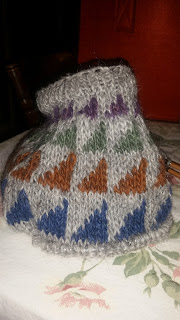 Both socks and the Match and Move are in my bag to work on at lunch today…hoping to accomplish something!

How was your weekend?
Posted by Vera at 8:55 AM