Another bleak, grey, damp, cold morning here in eastern PA.  Sort of matches the mood we are all feeling these days.  Bleak times...and frightening.


We did manage to have a nice weekend though.  Saturday was the Chinese New Year and we headed over to Mailing's parents' home for dinner.  First we made dumplings.  Mailing's Mom made the dough and then rolled out the dumplings.  She is speedy!!  Using chopsticks, you pick up some filling and put it on the dumpling and then  fold it up.  The filling was ground port, ginger, scallions and some other stuff.  Delicious.  Mine are the ugly ones - lol 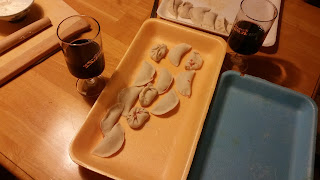 Once they were all made (and there were a ton), Mailing's mom cooked them.  Some were pot stickers and some were boiled.  Both were delicious.  Here are some of the pot stickers. 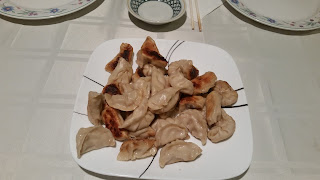 There was so much delicious food!  We had roasted duck on buns with slivers of scallions and cucumber, Chinese Cauliflower (different than the cauliflower your grocery store sells), other veggies and some sticky rice cake (love!!) for dessert along with fresh strawberries and blueberries.  I had also made a French spice cake and brought that with some cinnamon whipped cream. 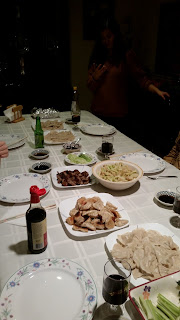 We waddled out and went home to watch an episode of the Crown.


Yesterday I managed to do some knitting on the socks for Mailing.  I decided on Dee's Take Five pattern which is so pretty and easy to memorize.  I think this yarn may be a little too busy for the pattern to show up, but at least it keeps me from getting bored with straight knitting - lol. 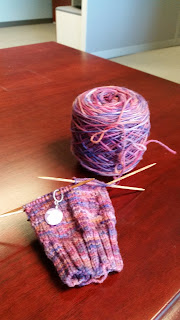 I also (finally) used my bow that Fletch got me for Christmas.  What a hoot!  I have not done archery since high school...so 44 or 45 years ago.  It was pretty chilly, so I only shot two arrows.  The first one I didn't pull back enough on the string and the arrow went into the ground about 2/3 of the way to the target.  The second one I way overshot and the arrow flew into our woods (we did find it though).  Obviously I need a bit of practice.  But it was fun!


Tonight I am finally going back to yoga.  Some classes were cancelled around the holidays and I skipped some just being too busy or the weather was too lousy.  I need to get back!