What a dismal, grey, rainy, chilly day it is.  Perfect for going back to work (not).


Last night's Hot Pot dinner at Colin & Mailing's was excellent.  I had never had this before and really enjoyed it.  For those unfamiliar, it is sort of like fondu, except that you don't skewer things and hold them in cheese or oil; rather you drop items into hot (boiling) broth.  Their hot pot has two sides so we had a mild broth and a (very) spicy broth.


To go in the broth we had:  fish balls (doesn't that sound disgusting???  but they are sort of like chicken nuggets except they were Pollack and they were not breaded and deep fried - they were good), squid, shrimp, beef, nappa cabbage, bok choy, mushrooms, Korean dumplings (with pork and veggies in them), seaweed and cellophane noodles. 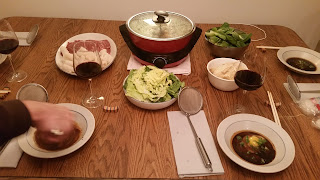 You start by mixing a sauce in your bowl.  I used Siracha, sesame oil, peanut sauce and a little soy sauce.  Colin & Mailing each added a raw egg to their sauce.  Then you pull cooked stuff out of the pot and put it in your bowl. 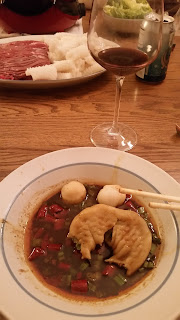 The dumplings were HUGE as you can see above.  The round white things are the fish balls.  All the red stuff in my bowl were pieces of chili peppers.  I love hot/spicy stuff, but this was way over the top.  My nose kept running and at one point I could hardly speak!!  Luckily I had some seltzer water in addition to the wine.

A fun experience and one I would love to do again!

And, the socks that I had such a horrible time knitting for Colin ended up not fitting him...after all that...But, they do fit Mailing.  I've promised to make her a more "girly" pair and also to make Colin another pair...with different yarn for sure.