The sun came up this morning like a ball of fire!  And it is bright outside.  Wow - so nice after some grey days.  Another mild one predicted for today and we are actually planning to have a fire tonight after dinner.  Should be lovely.

Speaking of lovely, our work Thanksgiving luncheon was so nice on Tuesday.  Terrain was beautifully decorated - very rustic and gardeny (is that a word?) and the food was fabulous!  They also had a fire pit set up for us outside with the making of smores for after lunch.  It was a very mild day, but some folks stayed to enjoy that.  I left right after the luncheon was over.  I knew it would be a trek to get home (and it was - traffic was so heavy), but still I was home by 3 which was so nice.  Fletch was at a doctor's appointment, so I took a quick 45 minute nap and got up just as Fletch came home (and he is now scheduled for his 2nd cataract surgery in late January!!).

The George Winston concert we went to Tuesday night was so good.  I didn't know it, but he also plays the guitar and the harmonica.  But mainly the piano.  I kept thinking how much Fletcher's Mom would have enjoyed the concert (she played the piano and gave piano lessons to neighborhood kids for years).  He played for an hour, took about a 15 minute intermission and then played for another hour.  One of the things I enjoyed about the concert was that he spoke about each piece and who/what had influenced him.

The venue - The Sellersville Theatre - is a small, intimate theatre (only around 325 seats or so) and there were not too many empty seats.  It was a late night for me as we didn't get home till almost 11, but so nice.  Fletch really enjoyed it which made me happy since I had gotten the tickets as a birthday present for him back in September!

I managed to get a little (very little) knitting done on my brother's sock: 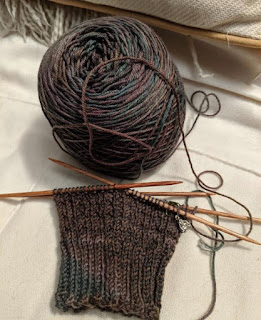 It's coming along nicely and I'm enjoying the yarn and the pattern.  It came to work with me today, so I'm hoping to get a bit more accomplished at lunch.