Another very chilly morning (in the teens), but my head was warm!  I finished the hat last night.  It's not blocked but it fits very well and it's cold out, so I wore it today. 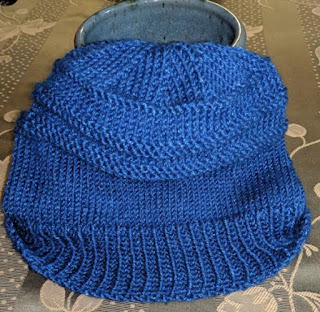 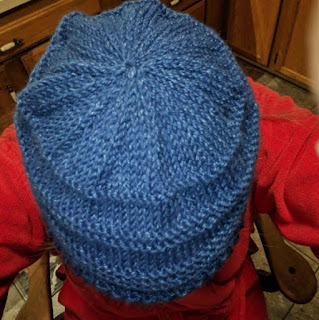 Tonight I'll wind the yarn that came in for Fletcher's cowl and knit a swatch and then design that.  I'm looking forward to doing something different.  Of course, I'll need to measure Fletcher's neck and I told him I promised to not draw the tape measure too tightly - lol.

While I was knitting in the kitchen last night, Tyg was playing with several different toys and batting them under the buffet.  He would scoot under and then suddenly the toy would come flying out - he would make a good hockey or soccer player. 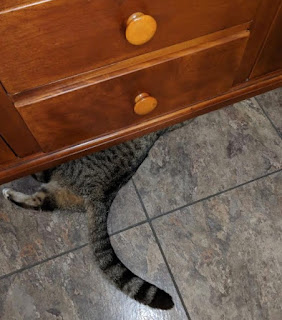 I have been having the strangest dreams lately.  Two nights ago I dreamed that I somehow ended up in a place where there was a "big dog contest" or parade.  All these folks were walking dogs that came up to their shoulders!  And some people brought alpacas that were extremely tall.  Not sure WHAT I was thinking when I went to bed that night.  And last night I woke up at 2:30 having a very weird dream with Fletch and a bunch of people from work in it.  Hoping for a better night's sleep tonight.....

Still reading "As Bright As Heaven" and enjoying it.  It's nice to read a "real" book for a change...though it is a bit heavier than my Kindle.

Hope your week is going well!
Posted by Vera at 8:09 AM