Yesterday was our Halloween "party" at work.  Some of the costumes were so clever (others...not so much...).  The food was quite good and there were plenty of laughs.  Pictures that were taken did not turn out well - the room was too dark.  I think the best costume(s) were from cash management who came as Little Bo Peep and her sheep.  Hysterical.  This is the same group that won a few years back for Train Wreck Barbie and Alcoholic Ken.

Anyhoo, it was a crazy/busy day for me (I was in the office by 6:30 a.m.).  It's that time of year when EVERYTHING happens and is due at the same time - performance appraisals, bonus calculations for the field, etc., etc.  Today will be a little easier.

I did manage to knit some on the Crazy Hat last night and am now up to the decrease part of the crown.  Here's a picture of Fletch trying it for me. 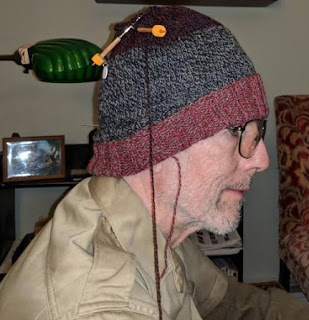 You can see (barely) a third color at the top.  I think a 4th color will appear, but not until the very end of the decreases.  It is soft and feels really nice.  I hope Colin likes it.

Tyg has been on a walk-about or gallivanting around quite a bit lately!  Last night as I was cooking dinner it appeared he was in a bit of a stand-off (picture a bit fuzzy as taken through the door so the cats wouldn't be scared off): 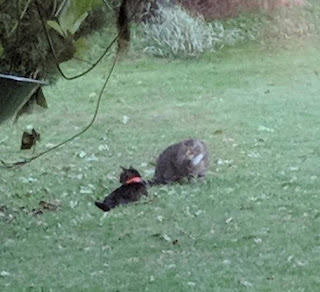 Shortly after I took this shot, the interloper (with a rather large, red collar) got up and walked away.  Tyg quickly followed and he never came back till 5:45 this morning!!

Well, the e-mails are flying in with questions regarding bonus roll-ups I completed yesterday...I'd best get to it!  Happy Mid-Week!