I have the luxury of an extra hour plus at home this morning due to a dermatologist appointment at 8:40.  It's the perfect morning to be lazy...gentle rain just beginning - though much heavier rain forecast for later.  Gosh it is STILL HOT - 80 degrees at 6 a.m.  And HUMID.  However, there is the "promise" of Fall-like weather following this storm.  One can only hope.


Meanwhile, I thought I would share three things from the garden this morning.  We have several Burning Bushes on our property and none of them are terribly colorful (yet??).  Usually they start off by getting red on the top and then that gradually moves down.  This year, however, the one by our shed is trying to imitate a skunk!  It has a red stripe going down the side. 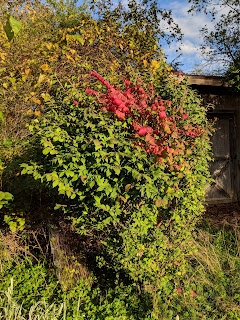 Next up are the tomatoes Fletch planted at the normal time.  When we left for vacation there had only been two or three tomatoes that showed up and they rotted on the vine before ripening.  When we got home this is what we saw: 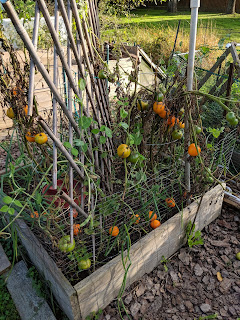 Tomatoes all over (there were many more, but I have a HUGE bowl of tomatoes on the kitchen counter), but almost no foliage.  Weird!  Also weird - the color of the tomatoes - more orange than red.  I have not tried them yet.  Fletch had one and said it wasn't that great.  But, I figure I can use the bounty in soups and stews.  And, hopefully, make some fried green tomatoes!


Last, I love this picture of our picnic table.  The petunia had been hanging on our patio, but it was ailing/failing, so Fletch just plopped it on the table and put another hanging basket on the patio.  Again, we came back from vacation to find this gem blooming like crazy!  The little pumpkin is one of the volunteers we had and the bird statue is from a friend (thanks Carol!). 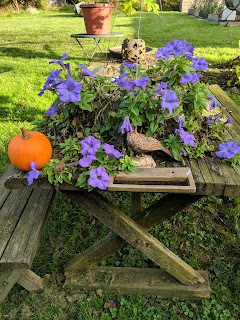 Email ThisBlogThis!Share to TwitterShare to FacebookShare to Pinterest
Labels: Garden, Three on Thursday