Hi Everyone,
Another chilly morning and...there were flurries in the air yesterday as I cooked dinner.  The temps are steadily rising all week though and I am hoping and praying that the weekend forecast holds.
As I mentioned yesterday, we had an off-site luncheon yesterday.  It was really lovely and the food was so good (Caesar salad, some antipasta, rigatoni with broccoli rabe and roasted tomatoes, sausage and peppers, BBQ chicken, mashed potatoes and a TON of desserts).  Everyone received an envelope with two $100 gift checks inside AND we were out of the office for 3 hours.  I mention all this not to rub in what a fantastic place it is where I work, but as a preface for some talk that went on during the luncheon.
Bobby, our CEO, talked a little bit - mostly introducing new employees and thanking everyone for what they do each and every day.  He said that we are reinstating a suggestion box in the office.  We had one years ago, but people wrote in stupid suggestions (like wanting free ice cream in the summer...which we had at one point until someone kept emptying the freezer at night and taking ice cream home!!).  Then he opened up the floor for anyone to offer up suggestions for things that would improve the environment in our office and said he would hand out gift cards ($100 gift cards to Target, Lowes, Zapppos, various restaurants, etc.) to anyone who made suggestions.  You would not believe what people said:

OK, my rant is over (for the moment).  On to the beauty portion of this post.  This was one of the centerpieces on the tables at our luncheon: 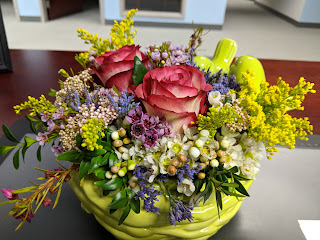 So pretty and colorful!  I love the little bowl that has two birds on it.  It is a welcome sight on my desk this morning as it is grey (and chilly) outside.
Posted by Vera at 8:28 AM

Email ThisBlogThis!Share to TwitterShare to FacebookShare to Pinterest
Labels: work