Today is pretty chilly (doors partially frozen on the car this morning, frost on the windows....) BUT...Saturday's forecast is to be in the 70's.  I'm ready.  Meanwhile, I am wearing my Hitchhiker today!! 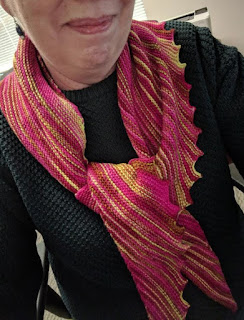 It feels good on my neck.  Still not as soft as I had hoped for, but the added warmth is good this morning.

A little bit of progress has happened on Fox Forest: 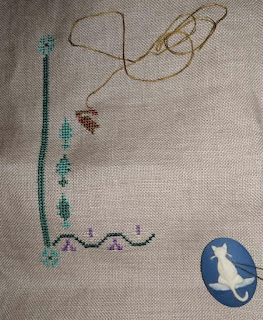 A few trees, and the brown stuff at the top is the beginning of a Fox!!  I would have done a bit more last night, but discovered the little paw was one row off...and I had to rip that out.  Slowly but surely this will get finished.

I've got a bunch of calls to make today (personal stuff).  Yesterday I did cancel the premium package we had for our cable (HBO, Cinemax, Showtime).  I don't watch anything on those channels and Fletch mainly watches Bill Maher on Friday nights on HBO.  We were paying $40 per month for those channels!  Instead we'll go with HBO Now for $15/month.  One of my things to deal with today is our wireless bill....wish me luck.

The sun is out here and I hope it's shining wherever you are.  Have a great Tuesday!
Posted by Vera at 8:07 AM