A beautiful Thursday morning with a little nip in the air (low 40’s) and a gorgeous pink sunrise.  Now back to vacation tales.

On Wednesday we left the Hocking Hills area of Ohio and headed North towards Canton.  We stayed at a KOA just SE of Canton.  Our first stop on Thursday was at Lehman's Store in Kedron.  Over the years we have ordered some things from this Amish store – mainly cast iron things (which now I find I can’t/don’t want to lift!).  The store is huge – ¼ mile long and a definite tourist place.  But, it was fun to walk around.  Fletch found a knife he wanted for splitting kindling and a book for a neighbor who has been a ton of help to us with electrical issues.

After that we headed to the Warther Museum in Dover.  We had never heard of Ernest Warther, a Master Carver.  His carvings are AMAZING.  Such detail!  Such tiny carvings!  He definitely had a “thing” for pliars and carved so many of them: 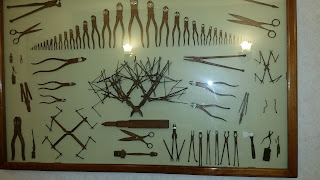 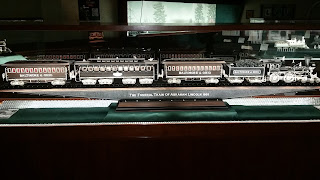 He started the Train on the 99th anniversary of Lincoln’s death and finished it on the 100th anniversary.  He used a lot of ivory and ebony in his carvings as well as wood.

Along with his wife Frieda and their children, they collected over 5,000 Indian artifacts – primarily arrowheads – which are on display in his workroom (and the men’s room – lol).  Fletch was in heaven – he started collecting arrowheads as a kid walking the fields of his grandparent’s farm in Virginia.  Frieda had a huge collection of buttons and there is a cottage on the property devoted to the designs she created with them: 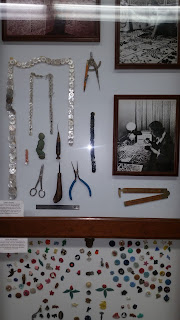 The buttons in the display under Frieda’s tools are all prizes from Cracker Jack boxes!  There were more button displays in the ladies room – lol.

Frieda was also a gardener and there are paths throughout their property.  There wasn’t a lot to see garden-wise in October, just a few flowers blooming, but they were beautifully laid out and would be a joy to see come Spring and Summer.

If you are ever in the area, we highly recommend stopping by to visit this museum.

On Friday we headed back to New Staunton.  Unfortunately we had to get off the highway to gas up the car in Pittsburgh.  Oy!  I was driving, and towing a camper through downtown Pittsburgh was NOT fun.  When we finally made it to our campground I promptly popped open a beer…and it was our last one (someone didn’t plan very well).  But, Frank, an employee at the campground, came to our rescue.  He was going out on a beer run for some workers who were having a cookout that night and brought back an ice cold 12 pack for us.  So nice.

Frank also stopped by our campsite Saturday morning to say goodbye.  Turns out he is a hunter (bow & arrow) and had just gotten a deer that morning (which he showed us…which I didn’t really need to see).  And, as we were closing up, one of the jacks at the back of the camper jammed.  Frank just came over and lifted the back end of the camper up to free the jack!  He wasn’t a huge guy, but man he was strong!  Thank goodness he was there.

Just a couple more pictures.  We ate very well on our trip (and I actually lost a few pounds!!) – salmon over the fire, steaks, and the best were nachos that we did over the fire: 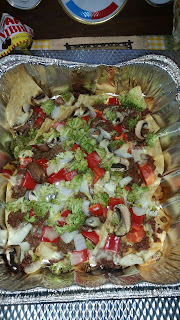 They were so smoky and flavorful, that this may be the only way I prepare nachos from now on.  We had a bit of taco meat on them, onions, peppers, mushrooms, broccoli and cheese.  Yum.  (And, that little bag in the upper left hand corner is filled with pieces of chocolate covered banana Turkish taffy - OMG, so good.)

Finally, I did manage to knit a bit on my Charade sock (the 1st of (hopefully) a pair.  I started these before Nutkin and then left them alone while knitting Nutkin. 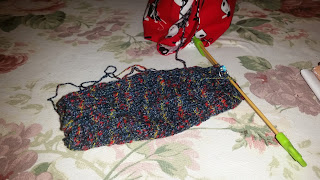 The yarn makes it difficult to see the pattern (just a simple two row repeat – one row all knit, the second row is a slip stitch pattern) and even the ribbing, but I’m enjoying working on them.  The above picture is 20 rows of twisted ribbing and 70 rows of the pattern.  Last night I knit a little more on them.  I want to make them longer -  closer to knee sock length - so I’ve got a way to go yet.

OK, this is long enough – LOL.  I’ve got another crazy/busy day ahead of me at work, so I’d best get to it.