Later than normal for me to be posting, but I've been having issues this a.m.  First, we received notice last week that we were out of data on our phones!  Not sure how that happened as it never has previously (except when we are on vacation and not using our own internet connection).  Something to figure out.  Then I could compose emails, but if I added a picture they would not go through.  Finally, I spent too much time trying to figure out why some blogs (blogspot.com) won't show pictures when I go to them.  Mine does if I visit my own blog, but Bonny, Dee, Araignee, etc. - none of their pictures are showing on my computer.  They do show on my phone.  Frustrating and weird.

Anyway, enough already!  The eyes are doing better.  The 2nd surgery was a bit more difficult.  My eye bruised...a lot...like every time she (the doctor) touched it, I bruised.  It is still fairly red and still a bit swollen.  The real problem this time is glasses.  When the first eye was done, I could still see out of my glasses with the other eye.  Now that both eyes have had the cataracts removed and implants done, my glasses are useless!  I can see distance-wise without glasses and have found that readers work ok (not great, but ok) for reading, knitting and stitching.  But, my eyes frequently get tired...guessing eye strain from not having the correct prescription...yet.  By early September this right eye should be healed enough that she can write an accurate prescription for me.  Hopefully!!

The weird thing with the second surgery is that I was more conscious for it.  The doctor and the nurses told me that would most likely be the case, even though the drugs were exactly what I had been given previously.  I could hear everything the doctor was saying (and remembered it) whereas with the first I have no recollection of the surgery at all!  So strange...

The weekend was quiet.  We went over to Colin & Mailing's Saturday morning (I actually drove over!!) and we all went to the Farmer's Market.  Fletch and I picked up some corn, eggplants, beets, and mushrooms.  Colin & Mailing just bought two loaves of fresh bread:  a seeded rye and a whole wheat sour dough.  They had made bruschetta from farm produce that morning, so when we got back to their house, they toasted some of the bread with EVOO and we had that with the bruschetta and a crisp white wine.  A very refreshing and tasty lunch.

Have you ever had ground cherries?  I had them for the first time last year and when Colin came over last week he brought us a quart of them from the CSA they belong to.  They are tiny, but very tasty with a satisfying pop when you bite into one. 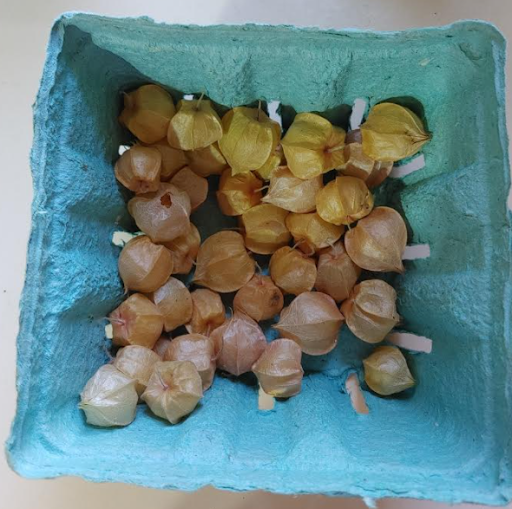 The quart basket was full when Colin brought it over...I've been munching on them (I don't think Fletch eats them). 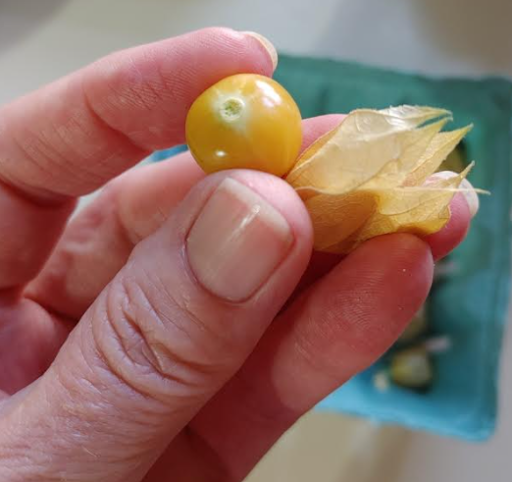 The husks just sort of slide off, so a little work, but worth it.  Kind of like mini tomatillos, but a different flavor.

Tomorrow I head to the office.  I have a meeting at 9 with Mike who is taking over the East Coast from Bill.  That was no surprise and I've worked with Mike for years, so no biggie.  The West Coast replacement has been selected and is a huge surprise - not whom we thought would get the job.  A bunch of noses are going to be (or are) out of shape.  I believe the choice is purely political and I will be curious to see how it pans out (and I have to support this person as well).  Oy vey!  After I meet with Mike I will head home to rest my eyes a bit.  Bill's retirement dinner is tomorrow night, so I'll need to go to that (one of my least favorite restaurants - Sullivan's Steak House - noisy, overpriced and mediocre food - my opinion).

The day today is ramping up a bit, so I will be busy.  Fortunately my 10:00 conference call has been cancelled.  Hope everyone has a great start to the week!