Really no news...but I couldn't think of another title.  I miss doing Friday Feline posts...and I know I need to change the picture in my header and I will...at some point...just not today.

In the meantime (and before my 8:30 call) I wanted to show you that I actually have a finish!  Yup - Damon's "Out of this World" (my name) socks are complete. 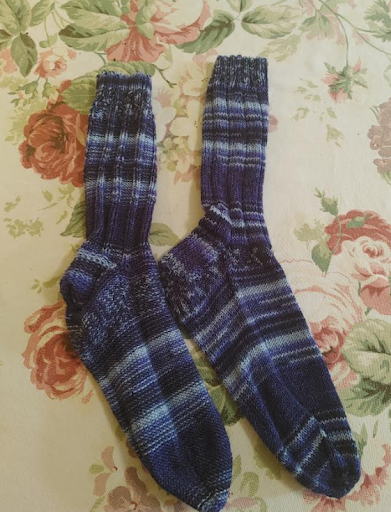 These were knit using #2 needles.  The yarn is from KnitPicks - their Static line and the colorway is "Neptune" (thus the name I gave the socks).  The pattern is a simple K6, P2 across after 15 rows of ribbing for the cuff.  The foot is just plain knitting.  Today (I guess this afternoon) I plan/hope to cast on for Peggy's socks (Peggy is Damon's wife).

Thursday's Mailing goes to her office and then out in the evening with work friends for Trivia at a local bar.  Colin has gotten back in the habit of coming over on Thursdays for dinner and he usually hangs around for a bit.  He'll have a cigar and sometimes we have a fire (not last night - way too muggy out).  The chicken thighs were a success as was the buffalo cauliflower.  I made some couscous to go with it all.  Colin brought over some of his garden bounty. 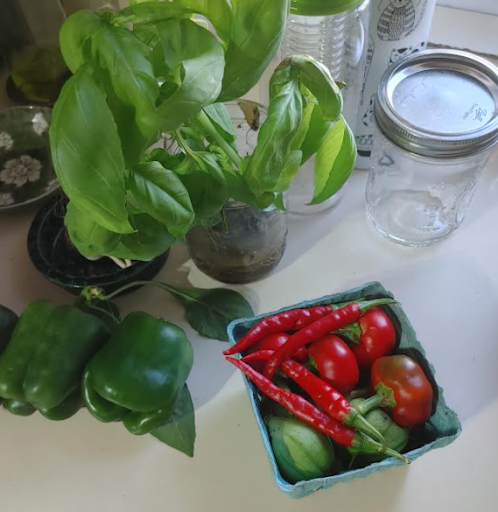 A bunch of hot peppers and some tomatillos!  The green bell peppers on othe left are from our garden -they are finally coming in!  I plan to make a vegetarian stuffed pepper dish and maybe I'll whip up a sauce using the peppers and tomatillos from Colin.  That may be a Sunday plan.  Tonight we will just have leftovers (there are so many in the frig).

Tomorrow I plan to get together with Dee (note:  she has a new blog address) for coffee, chatter and knitting in the morning.  And tomorrow night we are going to dinner at Mailing's parents.  Dumplings!!  I will make a dessert to take - most likely the peach/blueberry cake that I made a couple of weeks back.

It's already in the upper 70's this morning and it feels like it will be another hot and muggy one.  I think I'll brew up some tea now so that it can cool for iced tea later today.  Wishing you all a happy weekend!