I hope everyone had a wonderful weekend whether celebrating Easter, Passover, or nothing.  It ended up being a good weekend for us.

My office was closed Friday and we closed early on Thursday, so the weekend was off to an early start.  Thursday before dinner we were sitting on the patio and spotted two bluebirds in our yard!  We don't normally have them in our yard, so it was a real treat.  Such a vibrant color!

We had a bit of rain Friday morning, but then the skies cleared and I went out for a quick walk on the River Trail (in Valley Forge Park, along the Schuylkill River).  There had to be thousands of blooms along the trail.  Some yellow cinquefoil: 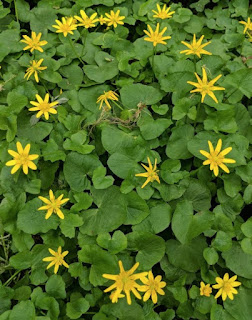 And then literally thousands of bluebells: 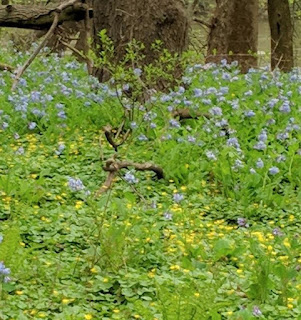 These ranged in color from a very deep blue to pale lavender to pink and even some white.  There were a few others out walking or jogging, but the trail was not crowded which was nice.  the river was pretty high after the rains we've had.  I ended up walking just over 3 miles.

Saturday, after morning rain again, I headed over to the trail along the canal.  There were only a few flowers blooming, but scads of turtles sunning themselves on logs or - in this case - on someone's dock: 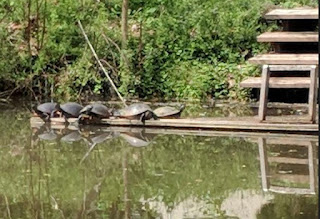 These are all pretty big ones, but I saw all sizes on logs.  I wish I had seen some birds.  There were only a couple of ducks and a couple of geese.  One person in a kayak and two people fishing.  Both the river and canal were still very high, and the trail was pretty muddy.  I spotted this poor soul on the other side on my walk back to the car: 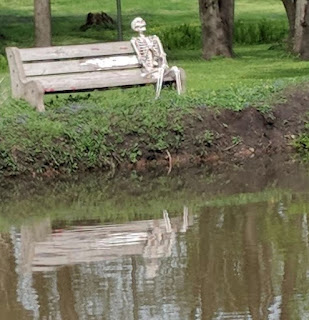 Guess he/she walked a bit too far.  I ended up walking just about 2.5 miles.

Sunday we headed over to Colin & Mailing's in the afternoon for dinner.  They made pineapple shrimp curry and Vietnamese spring rolls.  So good.  This was dessert: 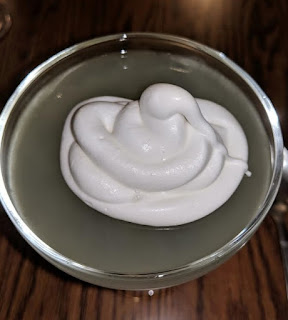 Essentially an extremely large jello shot!  It was "The Last Word" which is a prohibition era drink made with gin, green chartreuse, maraschino liqueur and lime juice.  They added a vegan thickener to gel the concoction and then put meringues on top.  This was one strong dessert!  Tasty, but very, very strong.  It ended up being a lovely day, except that Colin and Lance (Anna's boyfriend) both found ticks on themselves later in the evening.  I guess that season has started....

I did manage to do a little bit of knitting over the weekend, but I'll save that for another post.

How was your weekend?
Posted by Vera at 8:14 AM